We are fully open for UK and International Mail Order of music, guitars, strings etc. Follow this link for the latest information on deliveries and supplies. 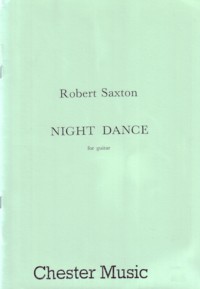 Robert SAXTON
Night Dance
Night Dance was written between September 1986 and January 1987 to a commission from David Starobin who gave the first performance on 5 April 1987 at the Wigmore Hall, London.

It is a miniature tone-poem depicting a scene of an old man sitting in a doorway at dusk. He is playing a guitar and begins by plucking the lowest string, as though searching for what he wishes to play. As the music gains momentum, it gradually moves upwards by means of the guitar?s open strings and breaks into a dance. Now it is dark and a nightmarish band of dancers passes by the old guitarist. The dance, jerky and uneven, develops melodically and harmonically the initial material of the piece. After a climax, the dancers move on - the dance music subsides and a nocturne is heard, interrupted periodically by the music of the dance in the distance. Maybe this is not geographical distance, but the distance of time, perhaps the whole episode has been mere memories. The piece ends musingly with the motive from which it began.