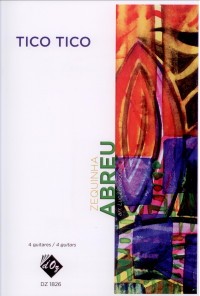 Those of you who love some of the wonderful duet versions of this piece will perhaps be hoping that by spreading the workload out it becomes twice as easy.
Not quite, I'm afraid. The tune, for example, is just as fast as ever, because that's how the tune has to go.
What it does mean though, is that some of the other parts aren't quite as taxing.
Broadly speaking, the arrangement comprises a tune plus a harmony line that matches it rhythmically, often a third below; sometimes the roles are reversed. Guitar Three provides a mix of arpeggios, choro-style rhythms and a little bit of 'whatever's needed right now'. Guitar Four has a lovely bass, mainly in 3:3:2 rhythm. Because of the writing, it's only Guitars One and Two that are really exposed and under pressure.
The extra parts (compared to a duet) allow a richer blend of pizzicato and normal sounds and off-the-beat accents become easier to do and all the more effective.
Starting in A major, moving into A minor, back and forth, the key fits the guitar well and the higher position notes are fingered. The publisher's reluctance to use position markings reveals a few areas where one is left to guess whether the fingering goes down the same string or up onto the next.
Although the piece is heavily arpeggio-based, all four lines of music fit the guitar well and the top part uses the occasional open E to facilitate some of the arpeggio patterns. The mixing of sharps and flats on the ascending and descending chromatic runs is well thought-out for clarity, though I would have preferred the reminder accidentals to be In parentheses. Sometimes the mix of short and long notes across the parts generates discords, but articulating the longer notes will not only make the problem vanish but will heighten then punchiness of the delivery. In some places, there are slurs that just give the right hand a little rest and make maintaining the momentum a little easier.
In terms of complexity, I'd put the four lines as sitting between Grades four and seven.
Nicely done, easy to keep in step, and of course, a real crowd-pleaser.