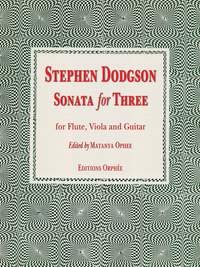 Stephen DODGSON
Sonata for Three
(1982)
Flute - Viola - Guitar
Stephen Dodgson (1924-2013) was a well known British composer, author of works in many genres (vocal, chamber, keyboard, symphonic), but it was his numerous works involving guitar which brought him particular recognition round the world. His first attempt at guitar composition was in 1952 at the invitation of Julian Bream. Later, he received much stimulus from John Williams, responding to his requests for recital music, song with guitar, chamber works and the 2nd of his two concertos. Subsequently he composed solo works for two other players: Philip Thorne in Scotland and Gabriel Estarellas in Spain. Latterly he was drawn into the possibilities of larger guitar ensemble, prompted by commissions from festivals at Esztergom, Hungary and Toronto, Canada. Attendance at these festivals brought him many new contacts, and led directly to the composition of SONATA for THREE in the summer of 1982. Matanya Ophee was not only Editor of the printed score, but also prime mover in the trio having been written at all.