SEARCH SMART! Unsure of your spelling? Try the Advanced Search! 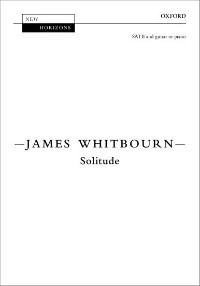 James WHITBOURN
Solitude
SATB & Guitar [vocal score]
(2019) [7:00]
Solitude is a setting of an early poem by John Henry Newman, the nineteenth-century Oxford priest who, in 2019, was declared a saint by Pope Francis. The work was commissioned by Oriel College, Oxford, where Newman was a fellow from 1822 until 1845, and was first performed by the Chapel Choir and guitarist Craig Ogden on 12 May 2019, prior to Newman's canonisation but following the Pope's declaration.
The original version for SATB and guitar is the composer's preferred scoring, provided that the choir and performance venue are of a suitable size to allow the guitar part to be performed without amplification. The intimate confines of Oriel College chapel, with its wood-panelled interior, provided exactly such a space. The instrumental element of the composition is informed first by the possibilities of the guitar writing, however, affecting such factors as the key choice, the harmonic sequences employed, and the ostinato patterns used. The vocal writing is also influenced by the initial scoring, with care being taken not to overwhelm the sometimes delicate but always beautifully expressive qualities of the guitar, striving instead for an interplay between voices and instrument.
The poem itself was written in 1818 when Newman was an undergraduate at Trinity College, Oxford. He imaginatively and powerfully introduces a theme - solitude - that was to become one of the recurring themes in his later influential writings.