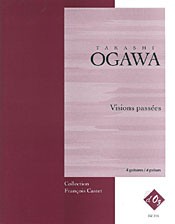 Takashi OGAWA
Visions passees
This six-movement work was written in 1997 but beyond, that no information is given in the introduction about the work, or the meaning behind the title.
The first movement Calmo starts with three guitars playing , long held harmonies over a static melody from guitar 1, before the direction Fantasmatique - tres doux, where the harmonies turn strangely sinister. Semitonal clashes mix with bunches of different chords which create an effect of polytonality in places. Allegretto con brio takes you into the second movement, where much is made of violent contrasts and semiquavers dashing from part to part. A long held eleven-note chord, underneath harmonically clashing fortissimo chords, takes you to the third movement Andantino, where guitars 2 and 3 begin a dolce episode before the other two join in. This single line music develops gradually into denser chords over a stamping bass line, which builds to a climax before a return to the opening idea. This goes straight into Scherzando Fanatico. This dotted rhythm idea is played by all four before splitting into two pairs answering one another, and then to an eerie passage involving glissandos from all four players. A brief return to the dotted rhythm leads into the fifth movement, marked Allegro Moderato - Cantabile. Here an'um-ching' idea is passed from one to another before building in tension to involve everyone. Again major and minor seconds occur often, as they do elsewhere. This extended movement leads to the final Adagio Nostalgico in Eb Minor. Marked pesante, it slowly gathers speed before a grandioso section, then winds down with a return to the opening idea of the first movement, wherein the harmonics return for a quiet dying away.
The harmonic style of Ogawa is tonal but bordering on the astringent in places and often results in a polytonal effect, where all four players are striking a different chord to create a complex multi-chord. This work is only for advanced players but I'm sure there are some enterprising quartets who may wish to give this a try.