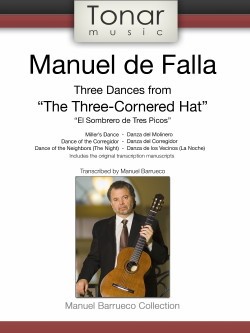 In 1987­­ I recorded four dances from Manuel de Fallas The Three-Cornered Hat in the first of what would turn out to be more than a dozen recordings for the EMI label. Since then, I have frequently been asked when I was going to publish them. I never did because I thought they were extremely difficult, to the point of being almost unplayable. These revised versions, though still quite difficult, are much more playable and apt to result in more convincing performances.

I have added alternative options in some places. The passages labeled ossia offer a more playable alternative to some very difficult spots, while those labeled original are just as they were in my original transcription. I have included them because, even if I no longer play them that way, I can see how some players might prefer the original transcription in those places. In Dance of the Neighbors, players should consider not playing the basses in parentheses in the opening measures of the piece, as omitting them helps make its performance more fluent and musical. For those who may be curious to see all the differences between the original and these revised versions, we have included the original transcription manuscripts.

The order in which the pieces are presented here is an order I feel works well, but players may also consider the following order: Dance of the Neighbors, Dance of the Corregidor (The Night), andMillers Dance.

It has been said that one can hear the guitar in all Spanish music. Im not sure I agree, but it is definitely heard­­ in these dances by Manuel de Falla. 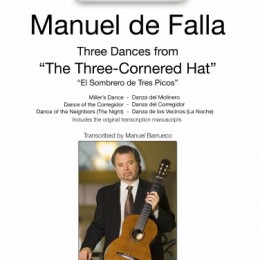 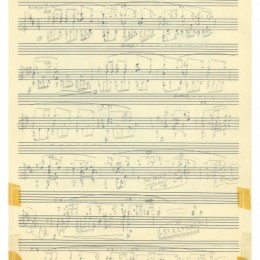