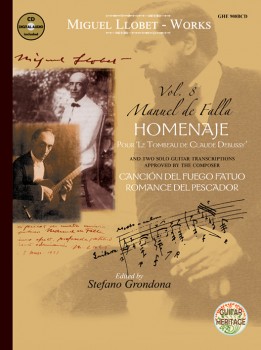 Llobet's role in the creation of this work, is now confirmed as having been somewhat wider than he has been so far credited with. Newly discovered letters from Falla to Llobet confirming this are reproduced in the edition with English translations. Through these letters, we now know that even in 1920, leading up to the publication of the Homenaje in La Revue Musicale, Llobet was already a close and welcome collaborator of Falla, as well as a contributor to the approved and final Chester edition of 1926 which is the standard reading of this masterpiece and a main source for our new reading.

We are pleased now to be able to debunk 'opinions', similar to those of the late John Duarte, and unsubstantiated, which propose that the 1920 Revue Musicale edition of the Homenaje is some sort of a 'sacred Urtext' and that Llobet's 'editorship' was personal, stylistic, likely without Falla's approval and not what Falla himself intended! In fact, in our opinion, almost exactly the opposite is the case and the evidence for this is now there.

The edition is generously documented with rare photographs, concert programmes etc. Iconographically rich it includes full reproductions of three key manuscripts of the Homenaje, including Miguel Llobet's unknown 1922 manuscript, the 1920 edition from the Revue Musicale, Falla's article Claude Debussy et L'Espagne in a new English translation and the 1923 Argentinian edition of the Homenaje from 'La Guitarra'.

Falla was enthusiastic about Llobet's performances of the Homenaje and he greatly appreciated Llobets transcriptions of the 'Romance del Pescador' and the 'Canción del Fuego Fatuo'; these together with the Homenaje figured as a 'Triptych' in Llobet's concert programmes. Both transcriptions are published here for the first time, prepared from Llobet's autograph manuscripts.

This volume includes a free Audio CD of the three works in this volume plus 11 bonus tracks. Our CD offers wonderful performances of Llobets complete transcriptions of Fallas music transcribed for the solo guitar, guitar duo and voice & guitar. 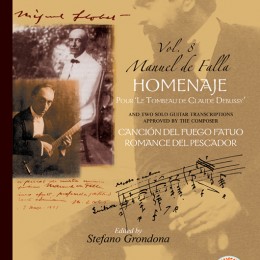 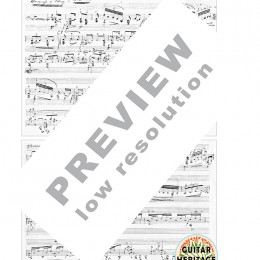