Despite the COVID-19 lockdown we are open for UK and International Mail Order. Please check for the latest information.

Remember, any search terms under FOUR LETTERS long will be ignored by the search engine. This includes SOR so search for FERNANDO SOR instead! 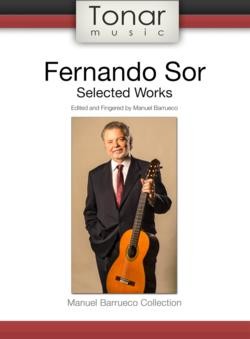 Edited and Fingered by Manuel Barrueco

Notes to this edition:
Taking a close look at Sors writing, one notices how he often made slight changes to the music when the same material reappeared. Even during a repetition, for example in the second half of the theme of his Mozart variations op. 9, he notated exactly how he wanted measure 38 to be played differently the second time. Generally, he would add or subtract ornaments; change the textures, notes, or rhythms; or even rewrite passages in a more improvisatory style. This, I imagine, would have been part of his performance style as well, as it matches what we know about performance practices of the time. To get a precise idea of how far a performer might have departed from a score, one only needs to look at Dionisio Aguados version of Sors Grand Solo op. 14. Here Aguado, a colleague and close friend of Sors, freely reworked much of the piece.

Because of these performance practices, I did not stop myself from adding a few ornaments whenever I felt the music asked for it. These appear in brackets in this edition in order to differentiate them from Sors own ornamentation. Also, I did not hesitate to borrow from the different publications of Sors Sonata Op. 15(b) whenever I thought it would enhance the music. More importantly, I tried to create a more convincing ending for his Variations on Folies dEspagne Op.15(a). These beautiful variations are not played more often because, in my opinion, they seem to lack a proper ending and leave us with the feeling that the piece was left unfinished. Utilizing Sors own material, I created what I hope is a better ending. I repeated the last variation and added a few extra notes to thicken the texture and to build up the intensity, leading to the return of the theme to finish the work. This is well within performance practices of the time, and respectfully uses Sors own material.