SEARCH SMART! Unsure of your spelling? Try the Advanced Search!

The Best of Mauro Giuliani (Zigante)

Mauro Giuliani is considered today to have been the most important guitarist-composer of the early nineteenth century. Not only was Giuliani the foremost player of his day: his fame reached far beyond the realm of guitar enthusiasts, earning him a place among the musical élite as a complete, versatile musician. Even so, by the end of the nineteenth century he was largely forgotten and his music managed to retain little more than a marginal presence in the repertory of the great guitarists of the early twentieth century. The current revitalization of his work owes its origins to the monumental research begun by Thomas Heck in 1971 and continued by Ruggero Chiesa, Mario Torta, Marco Riboni, and Gerhard Pen. Thanks to the dedication of these scholars, Giulianis music has progressively returned to its erstwhile prominence in the performing repertory. Giuliani wrote some 230 works, of which 150 carry opus numbers. They consist above all of pieces for solo guitar and a considerable quantity of chamber music for guitar and violin, flute, piano, or voice, as well as three guitar concertos. Based on the texts of the first published editions, the pieces in this collection have been revised only with the addition of fingering (according to the technique documented in Giulianis method (Studio per la chitarra opus 1) and his Esercizio per la chitarra contenente 24 pezzi della maggiore difficoltà, diversi preludi passaggi ed assolo opus 48, published by Steiner in 1813) and the correction of obvious typographical errors. 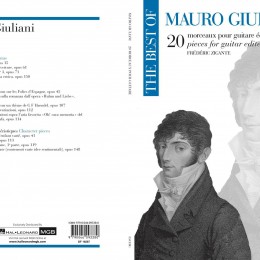