FANTASTIC reductions(40-70%+) on over 1400 mainstream titles. Items added DAILY in all categories. Single copies only, no back-orders, ONLINE ORDERS ONLY. When they're gone they're gone! 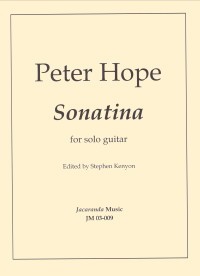 Peter Hopes compositions range from Light Music (including the Ivor Novello award winning Ring of Kerry suite) through Library music and Media music (including the BBC-TV news theme used from 1969 to the early 1980s), to a substantial body of more serious works written since 2000.

As an arranger he has written recording scores for such well  known singers as Jose Carreras, Jessye Norman, Stuart Burrows and Kiri Te Kanawa. His compositions and arrangements have been played by many major orchestras throughout Europe, America and Australia.

This Sonatina was composed in 2010 and premiered by Stephen Kenyon.