The Search Engine looks for EXACT matches, so the longer your search term, the less chance of a result. Less is more! "raise the bar graded repertoire for guitar grades 3-5 trinity college press 2017 isbn 9780857365965" is a poor choice!! "Raise" will find it!

"All my students, their parents, music department at school and I cant thank you and Guitarnotes team enough. We are so grateful for the prompt response and for being there during such a hard time." May 2021 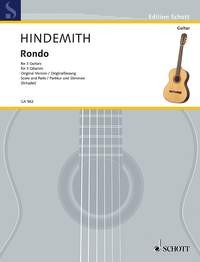 Paul HINDEMITH
Rondo (Original Version)
Hindemith wrote his trio setting in the original version for three guitars in 1930  initially intended as the middle piece of the cantata 'Wanderlieder' and commissioned by 'Tage für Neue Musik Berlin' [Berlin Days of New Music] under the motto of 'Spiele und Lieder für Kinder' [Games and Songs for Children]. In 1938, the composer had to leave his manuscripts behind in Germany, but later remembered the little piece when making a note of unprinted pieces. The original version of Hindemith's 'Rondo for 3 Guitars' was published in 2008 for the first time as part of the Hindemith Complete Edition and is now also available as separate edition. Includes a comprehensive preface to the work by Luitgard Schader.