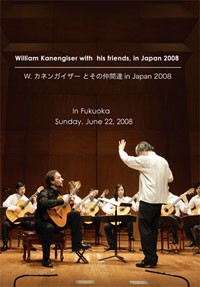 William Kanengiser with his Friends in Japan

William KANENGISER
William Kanengiser with his Friends in Japan 2008
A live concert DVD featuring William Kanengiser, acclaimed solo classical guitarist and founding member of the Grammy-winning Los Angeles Guitar Quartet. Recorded at the beautiful AIREF Hall in Fukuoka, Japan, it features the music of eminent Japanese guitarist and composer Shingo Fujii. With a varied program and behind-the-scenes footage, it is a fascinating look at some exciting new repertoire for guitar ensemble, and offers a unique glimpse of the collaboration between two artists and friends.
The centrepiece of the live concert DVD is the world-premiere DVD recording of Shingo Fujii?s Concerto de Los Angeles a work for solo guitar and guitar orchestra. Inspired by three "Angels" of the guitar, (Sor, Tarrega and Brouwer), the piece has been performed in Beijing, Osaka, Dallas, Washington, and at the GFA Festival in Los Angeles. In addition, some excellent smaller ensemble pieces by Mr. Fujii are featured, including the lyrical "Air" for guitar quartet, a driving trio called ?River Run?, the impressionistic duet "Danse D?Azur", and a specially-composed medley of famous Japanese folksongs for two guitars, "Rhapsody Japan". The program also includes a set of solo pieces performed by William Kanengiser, including Falla's The Miller?s Dance, Sor's Grand Solo, Brian Head's Lobster Tale, and the world premiere recording of Brian Johanson's Magic Serenade.