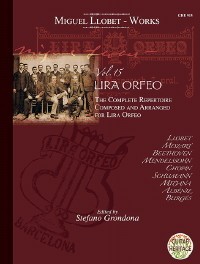 These arrangements are suberb and presented as they originally were in the same score form. The now relatively rare instruments called for can be replaced by suitable alternatives - this is ideal and interesting material for adapting to guitar orchestra/ensemble or mandolin orchestra, or similar.

Miguel Llobets famous Catalan plucked string orchestra called the Lira Orfeo was active in Barcelona from 1899-1906. Here we present a new engraving of all the surviving original scores, set in the same performing score format in which they were originally used 120 years ago.

The Lira Orfeo quickly became an important part of Barcelona's cultural scene; with Tárrega as its honorary president the Lira Orfeo society was founded in 1898 and an official inaugural concert, shared between Manuel Burgés (pno) and Miguel Llobet (gtr) took place in Barcelona in 1898. The aim of the society was to offer a full musical education, both theoretical and instrumental, for guitarists and players of other plucked instrument family, with eventually with a place in its Catalan plucked instrument orchestra of the same name.

The teachers for guitar were Miguel Llobet, Pedro Lloret and Domingo Prat. Prominent musicians such as Manuel Burgés and Baldomera Cateura were also on the teaching staff. Classes were given three times a week., and as the players were mainly amateurs with day jobs these took place in the evening and often went on until 2 o'clock in the morning.
The debut of the orchestra took place in 1903 and it gave regular concerts at top venues right up to the society's dissolution in 1907, mainly due to lack of funding. For the instruments used see the list of works below.

The repertoire is varied, selected, arranged by Miguel Llobet it was mainly drawn from traditional and impressionist Iberian music, as well as the German classics, it includes a specially commissioned work "Triomphe d'Orphée by the famous Catalán pianist Manuel Burgés.
We at Guitar Heritage are proud to present the first publication of this huge cultural contribution to music in its original form and prepared from the source manuscripts which were the work of Miguel Llobet. The edition has many illustrations, rare documents and photographs as well as a comprehensive critical commentary by Stefano Grondona - whose knowledge of Miguel Llobet, as well as of Catalonian culture, has made an edition of this scope possible. 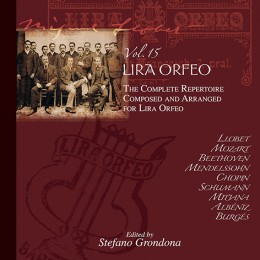 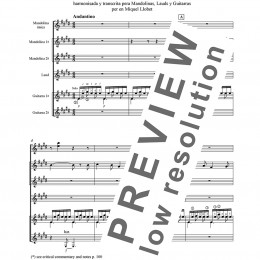