Avoid mixing AVAILABLE with OUT OF STOCK items as this will delay despatch of your order by at least 3-4 weeks.

"All my students, their parents, music department at school and I cant thank you and Guitarnotes team enough. We are so grateful for the prompt response and for being there during such a hard time." May 2021 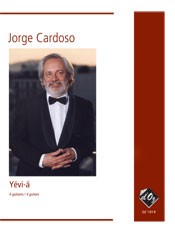 Jorge CARDOSO
Yevi-a
This is a substantial work in four movements. The work has been seized upon by a number of quartets across the world, and yet the score is remarkably accessible for such a large work.
Pia-e is a rasguido doble in E major, with each part entering in imitative way, set over a simple and effective bass in 3+3+2 rhythm, There are plenty of unusual sharps and double-sharps, but they are nicely under the fingers. The closing section groups the notes into longer and longer sequences of three, moving the beats around the bar in a fun way.
Mbegue is a samba, primarily in 6/8 with the occasional 3/4, Again there is some very pleasing imitation as the parts enter, The motifs are not so dissimilar from the opening movement, though the texture is thicker, with some very low chords in part four, and a top line as high as fret 17. Much of the writing is fun to play, with contrary motion and lines with a real sense of being.
Jhori, a choro has that typical Villa-Lobos rhythm and is slightly more challenging, with block chords in guitar three, and with the lead guitar often having the first beat of the bar missing, This is a big piece with a definite key change to E minor. It's gloriously fun to play, and straightforward enough that the ensemble is pretty much guaranteed to stay tight - just the thing needed to make this sing.
Kire-i, a polka, is perhaps the hardest, with the need to play four against three in 6/8 time, sometimes while the bass is playing 3/4 instead of 6/8, Not for the timid, and there's no hiding place, with this rhythmic feat being required of all the parts in turn.