Guitarnotes is the trading name of the Spanish Guitar Centre, Nottingham (UK), an independent company not affiliated to any other establishment.
Our story began in 1969 when the Spanish Guitar Centre was founded by the late Robin Pearson(1941-83) in premises on Clarendon Street near the Arboretum in Nottingham. Robin was a well-known recitalist and teacher who had previously managed a similar establishment in Cardiff for Michael Watson of the Bristol Spanish Guitar Centre. Robin returned to his home town and after a few years in Clarendon Street found the business had outgrown the original  premises so in 1975 moved to the location on Nottingham Road, Sherwood Rise which was to serve as the business's headquarters for the next 40 years. 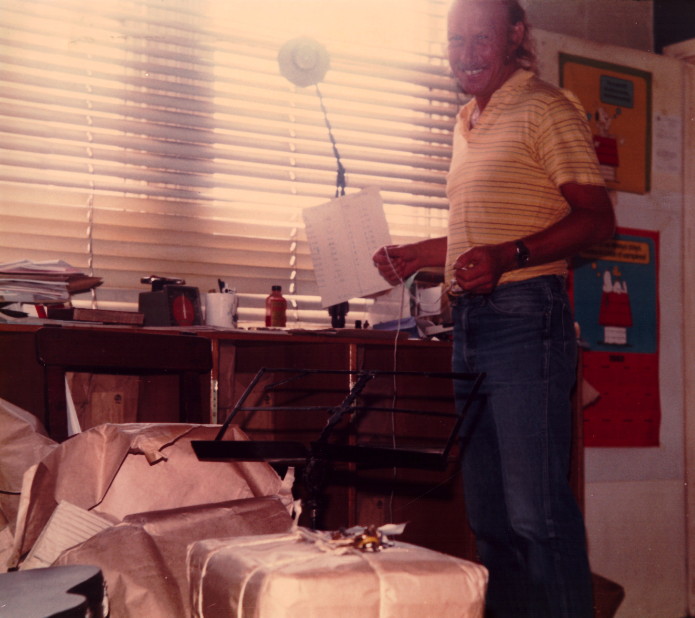 Robin was a much sought after teacher in the days when quality guitar tuition was hard to find. Pupils frequently travelled from far and wide and amongst these many went on to professional careers of their own. The young Nicola Hall, who achieved international acclaim as a recording artist for The Decca Record Company in the 1990's, was the recipient of a bursary from the City of Derby to study with Robin at the Centre. Similarly, a young student from Barcelona, Maria Dolors Cerda studied with Robin for her professional guitar qualifications who later went on to establish with local colleagues a highly successful music school, Ritme i So, in her home city which recently celebrated its 25th anniversary.
During this period Robin also composed and had published a number of successful works for guitar: La Guitarra Flamenca, Guitar Calendar, Side by Side (duets) which are still played and enjoyed by many guitar students to this day and in 1981 produced his first guitar music catalogue reflecting the growth of available repertoire for the guitar.

In 1979 he was joined in partnership by RNCM Post-Graduate and FLCM Catherine Dickinson with whom he was to share a successful duet partnership performing regularly around the country and on BBC radio and television.
The Centre became the focus of classical guitar in the English Midlands promoting many well-known international performers in concert(Carlos Bonell, Evangelos & Liza, Ricardo Iznaola, Laurie Randolph, Cheryl Grice etc), assisting luthiers such as Michael Gee & Kenneth Roberts in establishing their careers (also hosting Ken Roberts' workshop for several years) A number of UK luthiers: Kevin Aram, John Ainsworth, Martin Fleeson, Robert Welford and Alistair McNeill all benefitted from Robin's support. But it was in building up an unrivalled stock of specialist print music from around the world for which Robin was justly renowned and in 1981 he published his first mail order music catalogue. 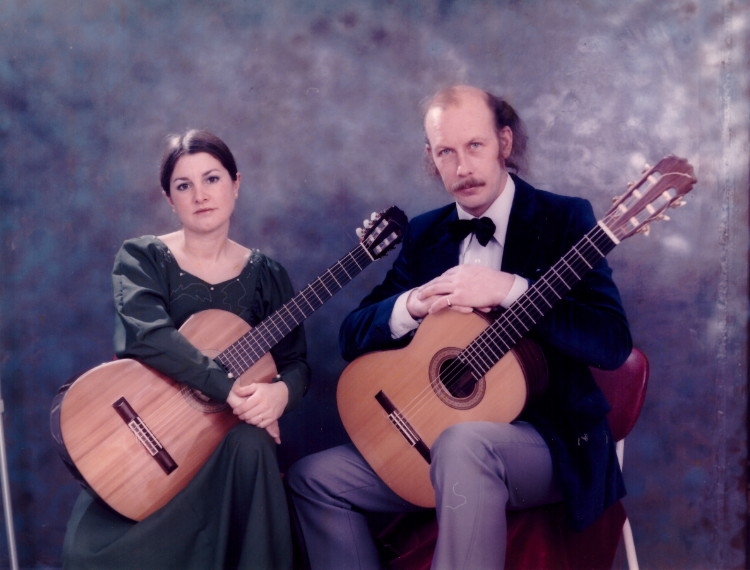 Following his untimely death in 1983, the Centre was continued by Catherine who endured much hardship working alone, was joined in 1984 by Andrew Liepins an accomplished player and keen guitar aficionado, who had recently completed a post graduate course of study at the CLCM with Graham Wade.
Andrew was to add a substantial supplement to Robin's catalogue in 1985 and then develop it further with several editions of his own Guitarist's Repertoire Guide. Since then the business has diversified and developed into a truly international retailer, dispatching goods to most countries worldwide. It was during this time that the Spanish Guitar Centre re-branded as Guitarnotes not only to reflect the importance of printed guitar music to its core business, but to maintain a distinct identity from other unaffiliated businesses in the UK of a similar name active at this time. 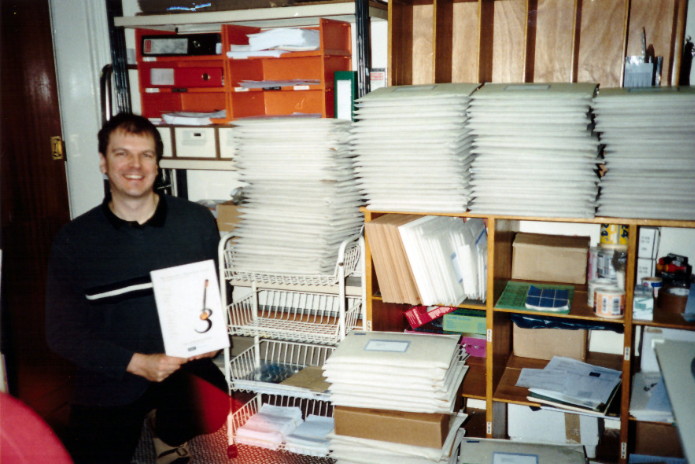 Catherine and Andrew also continued Robin's vision in promoting the work of British luthiers with new guitars from the above mentioned Michael Gee, Kevin Aram, Kenneth Roberts and Alistair McNeill with the addition of many established talents among whom were numbered: Brian Cohen, Paul Fischer, Edward Bryn Jones as well as the developing talents of luthiers: David Whiteman, Robert Cross, William Kelday, Alan J.Booth, John Claughton, Gary Southwell, Peter Barton, Christopher Dean, Philip Woodfield and others.
This period also saw the further promotion of both developing and established talent with opportunities of a performance platform for graduate students and others in the Guitar Centre's intimate cellar recitals. Guitarists including Decca recording artist Nicola Hall, RNCM graduates Selina Madeley, Australian Carolyn Kidd, Icelander Arnaldur Arnarson and RAM graduate Fiona Richardson, among others gave well-received concerts to enthusiastic packed houses. There were also collaborations with BBC Radio 3 at this time who recorded a number of SGC promoted concerts for broadcast by international artists such as Ichiro Suzuki(Japan) and Goran Sollscher(Sweden). A truly golden age! 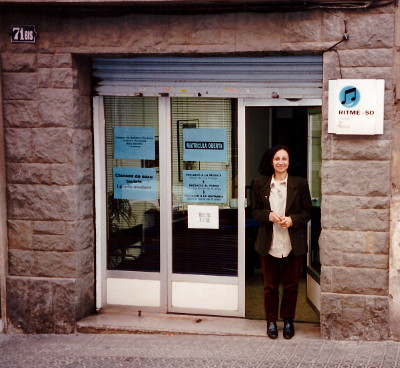 The 1990's also saw the emergence of the Spanish Guitar Centre as the appointed exclusive distributor for a number of diverse specialist UK and international guitar music publishers, a role which continues to this day with their appointment in 2019 to distribute EEE(Cuba), publishers of the music of Leo Brouwer.
It was also a busy time for exhibitions and workshops with activities around the country including Guitar Symposia at the Barbican(London), EGTA Conferences(Cambridge), Guitar Summer Schools and weekend courses (Horncastle, West Dean, Pulborough, Cambridge, Hatherop Castle, ABRSM (RNCM) etc.
Catherine too was a much sought after teacher with a wide catchment area of students including one young bursary recipient who made a monthly round trip of over 300 miles from her home in Northumberland!
She was also invited by the ABRSM to act as Moderator for the innovative 1997 guitar syllabus, the first to be constructed along lines recommended by EGTA. This was an arduous, frequently thankless role which involved cross-checking  works for consistency across grades as well as providing unacknowledged fingerings for the two books of scales and arpeggios.
Following the nationwide decline of high street retailing with the change to on-line shopping, in December 2015, after 40 years at their Nottingham Road address the centre relocated to a newly purposed site in Nottingham solely as a mail-order business.
The Centre today maintains one of the largest specialist selections of music for the classical guitar anywhere, with many thousands of titles in stock all of which are available online on this website in more dynamic detail than was ever possible with a print catalogue. Andrew is justifiably acknowledged for his matchless knowledge of the printed guitar music repertoire with many leading names in classical guitar both in the UK and overseas his regular clients. Indeed, the late Julian Bream was introduced to the Dynarette Support Cushion by Andrew and was so impressed with it that he used it for the remaining decades of his professional career. Andrew and Bream struck up a regular professional friendship and Andrew was frequently called upon to seek out elusive scores for him - more often than not already held in stock. Before moving out of his beloved Broad Oak House in Semley, Bream presented Andrew (an avid collector of guitar records) with a sizeable collection of his LP records many of which were test pressings and factory samples. A real archive to be treasured!
Andrew's commitment and efficiency are awesome in providing a matchless international mail order service. 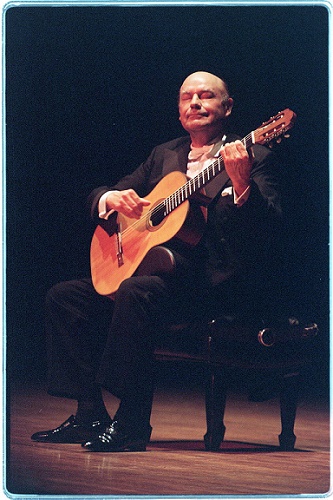 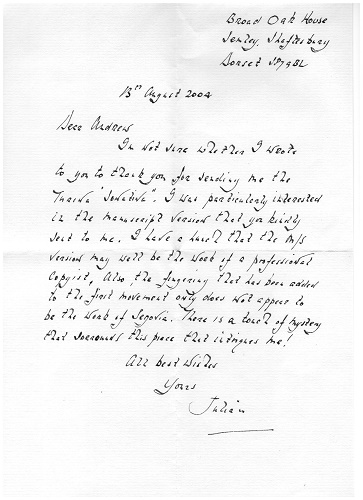 Catherine meanwhile, is the administrative rock behind the business essential for any company to thrive whilst continuing her busy teaching commitments with private pupils. The nurturing of young talent still continues not only through her teaching activities but over the years through guiding younger players progressing through specialist music schools and colleges in their next stage of instrument. Many young guitarists, now prominent professionals, benefitted from her experienced guidance in our showrooms including: Mark Ashford, Nicola Hall, Jonathan Leathwood, Selina Copley(née Madeley) Finbarr Malafronte etc.
Together Catherine and Andrew have to date amassed almost 80 years experience collectively in the business. Quite an achievement!